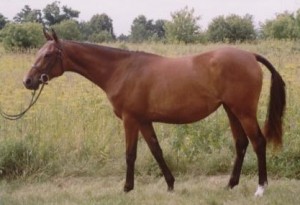 Classy but tough, this athletic little mare is a super mover and jumper. Gameela is a powerhouse and passes on her elegance to her offspring. She is started under saddle, shown in dressage for one season and has schooled cross country. She has a nice topline, good bone and short pasterns. Tight knees over fences and brave but still considered green. She has proven herself as a great mother to her two foals by Rotspon and Abke. 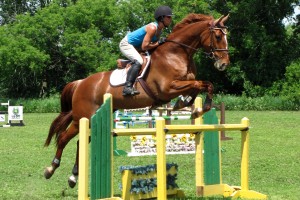 Gemstone has shown all around the northeast United States and the WEF up to Level 5. An excellent producer of quality foals, she passes on her conformationally correct attributes and her enormous athleticism including her powerful jumping ability. She was successful in the Jumper ring. Her sire, Gonzo I is also the sire of the approved stallion Gatsby. Gonzo I was the most sought after Hanoverian stallion in the U.S. until his untimely death in 1997. 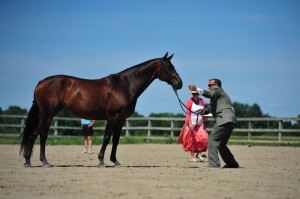 This beautiful mare was imported from Germany in 2005 where she received solid 8s for movement and ride-ability at her performance test, and has been title champion mare in Canada at multiple breeder’s shows. Licorne comes from a long line of States Premium mares. She has been our foundation mare for breeding and has proven herself to be a great producer of champions, giving us three lovely filly foals. Licorne passed away in March 2012, the day after giving birth – we miss her everyday. 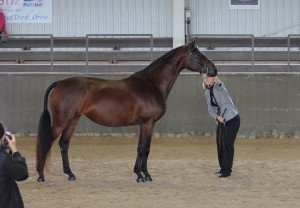 Rumtanzen is a sweet mare and takes after her parents with her elegant movement and beautiful elastic gaits. At the her Hanoverian Inspection, Dr. Ludwig Christmann comments were “good shoulder and topline, beautiful face, elasticity of movement and a good active walk”.

Her dam, St.Pr. Licorne (Lemon Park / World Cup I), is an imported States Premium Hanoverian mare (a Louis-Wiegels show finalist in Germany), received 8’s for movement and rideability. Licorne comes from a full line of States Premium mares from World Cup I, Woermann and Eizenherz I.

Her sire is Rotspon (Rubenstein I / Argentan), a 16.2hh black Hanoverian Stallion, Champion of the 1998 Stallion Performace Test with a rideability score of 9.5. His damline includes famous broodmare sires, Argentan, Pik Bube and Wendekreis.